Mineral demand for electrified mobility. The dark side of this type of mobility? 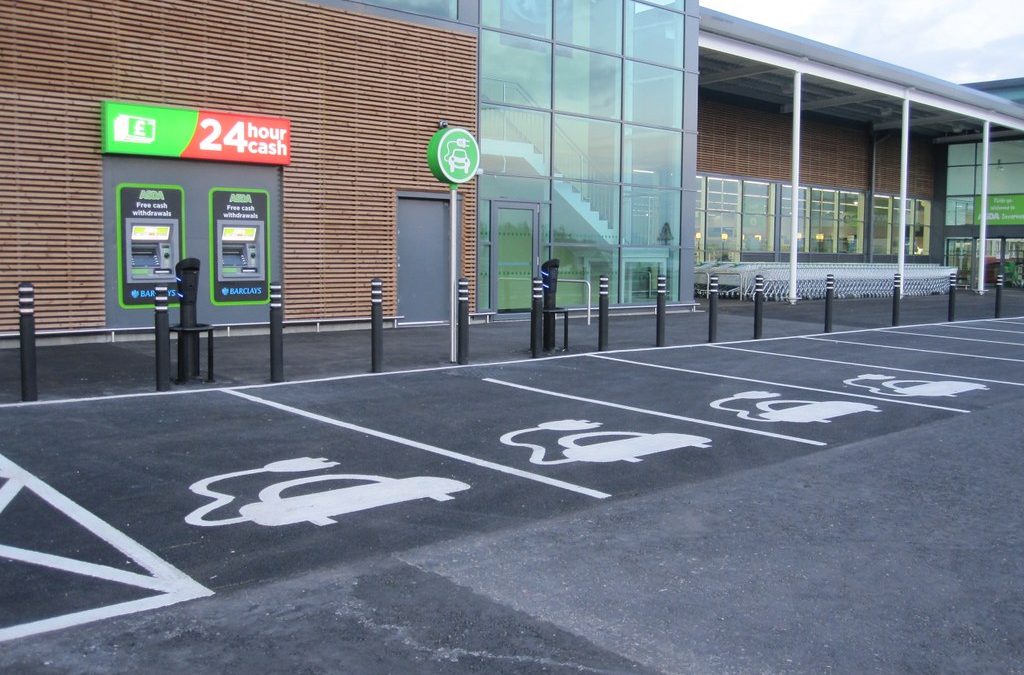 The emission of greenhouse gases has only increased over the years despite the increased efficiency of technological systems. This has happened for several reasons, the main one being the increased demand for goods and services in the world today (economic growth), which translates into the need to extract more resources and energy from our planet, producing a large amount of polluting and greenhouse gases.

This problem has caused the different legislative authorities, mainly at the EU level, to look for different solutions in order to initiate a transition towards a sustainable society, such as the circular economy or the increase of efficiency of the different systems. This issue has been present in the current affairs of this country, as it has been part of several amendments to the general state budget.

Within the scope of this global problem, the transportation sector emitted approximately 20% of the world´s total CO2 emissions in 2019. This has prompted many governments and legislative authorities to try to promote cleaner mobility systems than the current one. They have promoted public transport, the avoidance of unnecessary private vehicle use as much as possible and now electric mobility. As a result, a shift is occurring in the urban, road and rail transportation system towards technology that uses electricity to move.

1. Is this mobility technology as clean as we are told it is? This type of mobility brings with it some problems.

Linked to this technology, initially conceived as more environmentally friendly and energy efficient,  some problems arise, such as the increase in social inequality that may cause these vehicles (they have a high price) or in the area we will focus on in this post, due to the uncertain future availability of the materials it requires. Recent literature is warning that an exhaustive demand for this type of mobility could contribute to the depletion of some of the critical minerals on which it depends, leading to major problems for the manufacture of vehicles and all other technologies that use these materials if we do not find alternatives that allow us not to deplete our natural resources in the long term. This could be critical for the advancement of technology, for our economy and also for our planet in the not so distant future. It should be noted that the EU is well aware of this problem and has had a strategic policy on critical materials in place for the last 10 years.

2. How large is this problem likely to be? How can this demand for minerals from electrified mobility be assessed?

The high demand for critical minerals of electric mobility motivated the TFG “Análisis de los requerimientos minerales de la transición hacia una movilidad eléctrica” (the results of which have also been recently published in the specialized engineering journal DYNA), in which the mineral demands with respect to their reserves have been estimated over time in different scenarios and different alternatives are enunciated in order to avoid a possible premature depletion of the different minerals due to the transition in transport. The execution of this study has been based on two main pillars, the first one, the execution of an exhaustive bibliographic review in order to obtain the most accurate information about the technologies used in electrified transport and what materials they demand, and secondly, the use and modification of the modelling structures (in order to compute dynamically the mineral requirements associated to electric mobility) of the open source dynamic systems model  MEDEAS-World (This model has a post on this website), thanks to which, results can be obtained taking into consideration the feedbacks between the different economic and energy sectors (it is not a simple extrapolation of the observed trends based on a few simple rules). The following figure shows the aspects on which the literature review and subsequent evaluation are focused:

The batteries that have been evaluated for this type of mobility are 4 types of lithium-ion batteries, NCA, LFP, NMC and LiMnO2, since they are the most used batteries in electric mobility in the past and/or today. The simulations are run using each time a different type of battery assuming that all electrified vehicles use that type. In the following table (Table 1) we list some characteristics of these batteries:

The scenarios proposed in a previous work of the GEEDS research group “The limits of transport decarbonization under the current growth paradigm” have been chosen, as these allowed us to see the trends in the material requirements of electric mobility in a wide range of situations. The scenarios taken are; Expected EV trends, This scenario projects current and expected trends; High EV, This is a hypothetical scenario of very high electrification in land transport; E-bike, This is a scenario in which mobility based on very light electric vehicles is promoted.; Degrowth, the share of vehicles is the same as in the E-bike scenario, but reducing transport demand while also imposing a steady state economy (an economy that meets human needs without undermining the planet’s life-supporting services).

3. What was the result of the evaluation? A dark side to be taken into account.

Finally, the results obtained for the year 2050 are shown in Figure 1, which shows the demand for the minerals most required by this type of mobility in relation to their reserves, both for the different aspects of electric mobility and for the rest of the economy: 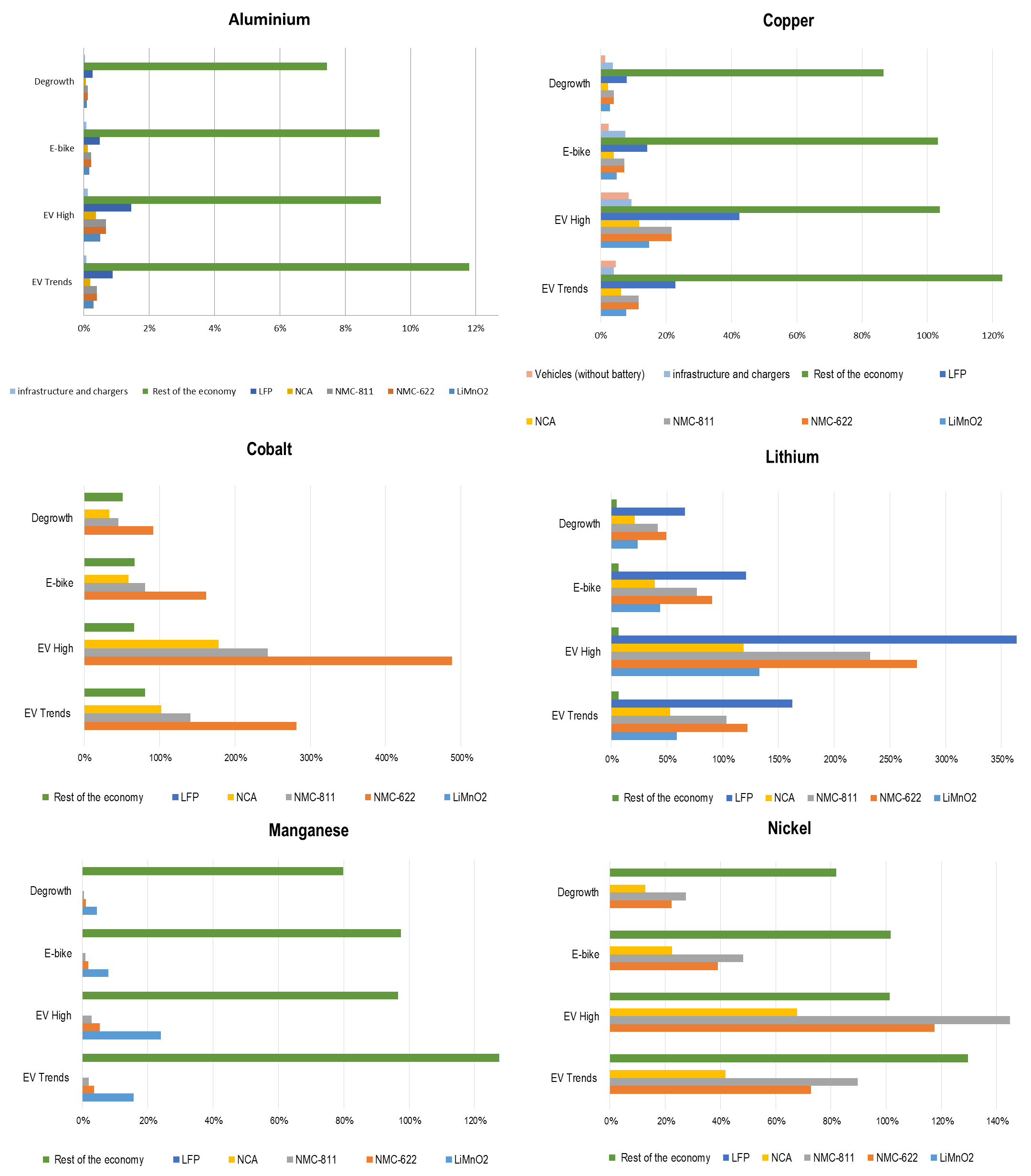 It can be stated, as shown in Figure 1, that all the scenarios, except for the degrowth scenario, would present a high demand for minerals with respect to their reserves by the different electric mobility technologies, which could lead to a premature depletion of several of them. In terms of demand from the rest of the economy, the scenario that extrapolates current trends, EV Trends, stands out, followed by the High EV and E-Bike scenarios, and finally, the scenario with the lowest demand for minerals is the degrowth scenario.

The batteries that would require the least materials are the NCA and LFP batteries. The NMC battery has been surpassed in performance and mineral usage by the NCA. The LiMnO2 battery has a very poor performance, so it has been doomed to disuse in electric vehicles. In addition, the LFP battery, the only one that does not use critical materials in the cathode (other than lithium), also has poor performance, requiring very large batteries (in size and weight) to match the capacity and power of batteries using cobalt.

Charging infrastructure, rail and copper used in electrified vehicles could add up to more than 17% of the copper reserve requirement in the most unfavourable scenario (high EV) and 7% in the most favourable (degrowth), so these are elements that must be taken into account.

4. What conclusions can we reach from the evaluation?

Two main conclusions can be drawn from this analysis, firstly, the replacement of combustion vehicles by electric vehicles could not be generalized worldwide, so that probably only  the richest regions with the greatest market power could obtain the raw materials to be able to use this type of mobility, secondly, the results show that alternatives beyond pure technological substitution must be sought. The alternatives that can be taken, seeking to reduce the effects on resources of this mobility, lie in adopting socio-economic habits along the lines of those assumed in the Degrowth scenario, a large reduction in the demand for transport by households, a large reduction in the use of air and sea transport, assuming a massive use of rail for the transport of goods instead of long-distance road transport and finally a steady state economy that does not need growth to provide welfare to people. The application of these alternatives in the model together with solutions such as the circular economy  or massive recycling shows that it is possible to control the expenditure of certain minerals in the field of transport and  also to reduce emissions.

We can finally state that a change in mobility without changing our habits and customs would not serve to reduce our problems with the environment and our planet, but rather to aggravate them, because what would we do if these resources were exhausted?, what would happen to all the technological elements that use them?, would we have to resume the manufacture of combustion vehicles?, also subject to geological constraints, such as the use of fossil fuels and some of the major GHG emitters and therefore major participants in the problem of climate change.