Reply to Fthenakis et al., (2022) (refused to be published by Energies, MDPI) 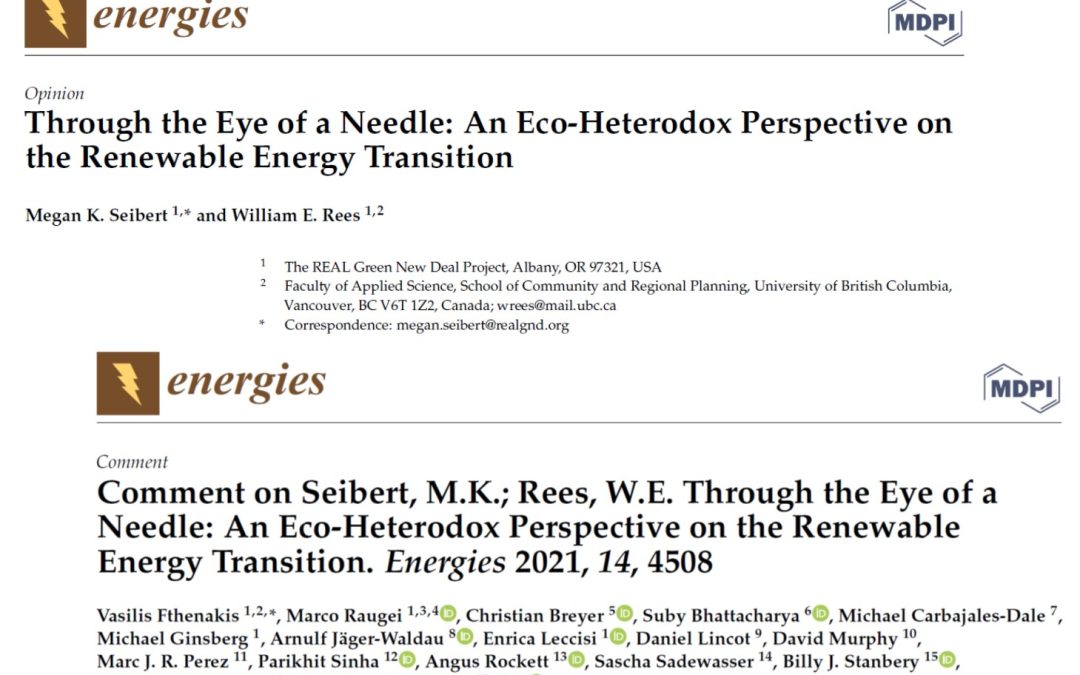 We are forced to published on our webpage a reply to a paper, Fthenakis et al (2022) [1], which responding to Seibert and Rees (2021) [2] unfoundedly criticizes our work de Castro et al 2020 “Standard, Point of Use, and Extended Energy Return on Energy Invested (EROI) from Comprehensive Material Requirements of Present Global Wind, Solar, and Hydro Power Technologies” [3], all of them having been published in the journal Energies by MDPI. This reply was not accepted to be published by the journal as follows: “the Editorial Office following Editor-in-Chief’s decision will not enter into a public debate on the Seibert-Rees paper and related papers”.

Below, we copy the cover letter and the reply sent to the journal by the GEEDS authors of de Castro et al 2020:

We have followed with interest the series of papers published in Energies starting by the article from Seibert and Rees (2021) [2], the comments made to it by Fthenakis et al. (2022) [1] and the subsequent response of Seibert and Rees (2022) [3]. Although Seibert and Rees (2022) have given a general response to the criticisms made, we want to defend ourselves against the incorrect criticisms specifically and directly referred to our work in Fthenakis et al. (2022) that have not been addressed in Seibert and Rees’s response. We understand that although your journal has decided to close the issue of the Seibert and Rees paper, the comments of Fthenakis et al. criticising our papers require an independent reply. As we show below, the addressed critics do not correspond with our published work, are hence clearly false and put into question not only our scientific credibility but also the peer review and editorial process of Energies because one of the critized work had been previously published by this journal.

As we are about to show, the parts of the Fthenakis et al. (2022) [1] comment referred to our articles cited in Seibert and Rees are not correct, and were not addressed in the Seibert and Rees (2022) reply [3].

“Finally, Seibert and Rees devoted just one sentence to the very important topic of Energy Return on Energy Investment (EROI or EROEI); they claimed that “even without such drawbacks, solar PV has a low energy return on energy invested (EROEI)—too low to power modern civilization [131,132,133,134].

In these previous paragraphs the statements that refer to us are clearly not correct.

First of all, the qualification of the authors of [132,133] as “fossil fuel advocates” is unjustified in the text and it is hence a pure value judgement from Fthenakis et al. Moreover, it shows a total lack of knowledge or misunderstanding of the research work of the authors and their personal commitment in the fight against climate change and unsustainability. Carlos de Castro, Iñigo Capellán-Pérez and Luis Javier Miguel belong to the University of Valladolid Group of Energy, Economy and System Dynamics GEEDS[*1] research group. GEEDS’s main research develops within H2020 European and National research projects (MEDEAS[*2], LOCOMOTION[*3], RethinkAction[*4]) and (MODESLOW[*5]) is oriented towards finding the best path for energy transition towards a low-carbon society and economy based on renewable sources of energies.

With relation to the assumptions considered in our study, Fthenakis et al [1] write: ” De Castro’s PV EROI calculations [132,133] appear to be based on 30-year-old data corresponding to 400 μm-thick Silicon wafers and cement platform foundations of low efficiency photovoltaics in low irradiation regions and the worst conditions of severe weather during installations“.

Let’s first clarify that the studies [132] (de Castro and Capellán-Perez 2020, [4]) and [133] (Capellán-Pérez et al 2019, [5]) share similar inputs with relation to material intensities but are not exactly the same, which for the sake of transparency was clarified in “Appendix E. Comparison of Results with Capellán-Pérez et al. (2019)“ [4].

Let’s now discuss the critized assumptions one by one, as they are documented in detail in the main papers and Supplementary Materials of [4] and [5]:

In the light of the above, we can conclude that the critics to the papers [4] and [5] as stated in the “Comment on Seibert, M.K.; Rees, W.E…” [1] are not substantiated and do not hold. We would very much welcome in-depth revisions and legitimate criticisms to our work, as it is the best way for us in particular and Science in general to progress in knowledge, however we deeply regret it has not been the case here.

We appreciate the support and encouragement of our research group (GEEDS) on this issue, since we understand that the false comments made by such a large number of authors (17) from various academic institutions and private companies, by extension, can also harm the good name and prestige of our group.

The reply we submitted to the journal ended here, however we must note that there are more issues in Fthenakis et al., (2022) related to EROI which should be addressed. We highlight here their following statement “…nor did they cite other independent studies pointing out that a renewable energy-based society can deliver the EROI required for long-term stability [62–69]“, we would like to point out the following:

First, of course, renewables can deliver the EROI for human flourishing as it has been the case in many societies and periods across human history. Implicitly, the point here is if renewables will be able to support modern industrial societies as the ones existing today in the rich countries. This should be always remarked since it leaves the door open to envisage alternative sustainability paradigms which is undoubtedly a more resilient strategy for planning the inevitable forthcoming energy transition.

We expressed our views on EROI state-of-the art in our 2020 paper (especially in section 2, discussion and Appendix of comparison with Brockway et al 2019), the reality is that there is much work still to do to have robust conclusions. EROI is related with RES potentials (cf. Élise Dupont et al works), so here the scale is critical. Also, hydrogen and synthetic fuels are key within the Green Deal/Growth discourses. Both issues are blind spots of the dominant paradigms.

We’ll try to continue to contribute to shed light on these important questions and hope that so will other research teams across the world to enrich the discussion and improve policy-recommendations.